With much anticipation, construction of the new Passenger Only Facility (POF) serving the Water Taxi and Kitsap Fast Ferry is nearing completion. Over the last few years, you have been boarding at the temporary passenger ferry terminal located on Pier 52. On Monday, July 29, the new facility is scheduled to come online and will be the new home for passengers coming from or heading to Vashon Island, West Seattle, Bremerton, and Kingston.

To get the terminal ready for passengers, we must temporarily suspend all service for a week. That means no Water Taxi or Kitsap Fast Ferry service between Monday, July 22 and Sunday, July 28. During that time, crews will transfer equipment, set up overhead passenger display monitors and necessary hardware for ORCA readers, and move the gangway from the temporary location at Pier 52 to the new terminal at Pier 50. Testing during this time will help to ensure a smooth transition when we resume service on Monday, July 29.

We are looking forward to the opening of our new terminal and hope you will enjoy the improved space and permanent location. During the temporary suspension of service, please consider one of the other Metro options below and sign up for service alerts on our website to keep up-to-date on our progress.

How to get around while Water Taxi service is suspended

While Water Taxi service is suspended, there are options! Riders are encouraged to use one or more of the following options:

Thank you for your patience during this closure as we prepare your new passenger ferry terminal! 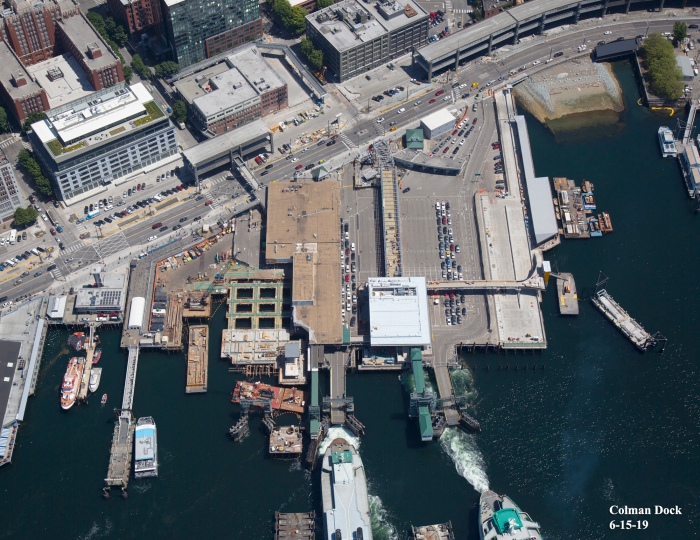 An aerial photo of the Colman Dock taken on June 15, 2019. The temporary passenger only facility can be seen on the left side of the photo while the now-nearly complete facility is on the right.

2 thoughts on “Final hurdle to the new Water Taxi facility? Temporary shutdown for one week”