A couple of years ago, as I was sitting on the water taxi on my way home to Vashon, I struck up a conversation with a couple from England. As it turned out, they didn’t plan to set foot on the island. They were taking a sunset cruise on the water taxi, opting for the King County-owned catamaran, they told me, because it was much lovelier than a cruise on one of those tourist-filled commercial boats.

This is my life: commuting every day via a boat some ride for the sheer pleasure of it. People often ask in a rueful tone about my daily commute into the city. My answer: The commute is really quite lovely, and I’m often torn by my choices. Do I read a book, talk to a fellow commuter, or simply stare out the window at the glassy blue water and the forested flanks of Blake Island?

I rarely step into a car anymore. A bus picks me up 10 minutes from my home and drops me off minutes before the boat’s departure in the morning; the evening routine is much the same in reverse.

This boat and these buses are of course supported by tax dollars. Indeed, I see my commute as government at its best. The boat is nearly always full. While the cost of a ticket is not inconsequential — $6.25 per trip (for cash, or $5.25 with an ORCA card) — it’s more affordable than driving a car and is subsidized by many employers who realize the benefits of encouraging their employees to leave their cars behind.

And get this: The bus that picks me up on Vashon is almost always on time, as is the water taxi it delivers me to. The crew on the boat is warm and friendly. And unlike the former Vashon passenger ferry that sank off the coast of Zanzibar, a boat that was overloaded and employed on a route for which it was ill-equipped, this journey feels utterly safe.

Blasting government is a sport these days. And for sure, government isn’t perfect. The other reality of my commute is the one I face as I walk each morning through City Hall Park, living quarters for a small but constant collection of homeless people who sit on the benches with their meager collections of belongings. Often, a woman who looks racked by drugs asks me for a penny. Once, more poignantly, I heard her say to someone eating a sandwich, “You gonna finish that?” 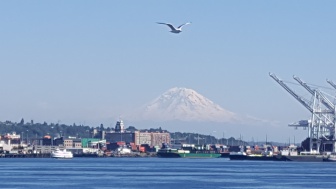 Despite our best efforts, the epidemic of drugs and the pain of untreated mental illness are a drama that plays out on our city streets every day, a reminder of the seemingly intractable problems even a well-run government faces.

At the same time, my daily commute has given rise in me a deeper appreciation for what it is that we can achieve when we work together, which, ultimately, is the definition of government. We, not them. Collective action, not finding our own way, separate and apart. And often, it’s at the local level that we see our greatest successes: Libraries and schools, parks and sewer systems, land protection and water taxis.

What’s more, these aren’t just luxuries. These are amenities, for sure, but with benefits to society that are profound: cleaner air and water, wildlife habitat and playgrounds, public safety and roads that aren’t so clogged. We all stand to gain from effective and efficient government. And the water taxi – well-run, much-used and serving a clear need – is a great example of government that works.

So my commute is good. In fact, I wrote this entire piece while riding on the water taxi, though it took a while to finish it, as I found myself often wanting to chat with fellow commuters or stare out the window at Puget Sound. Who knows? One of these days I might spot a pod of porpoises as I make my way to work.