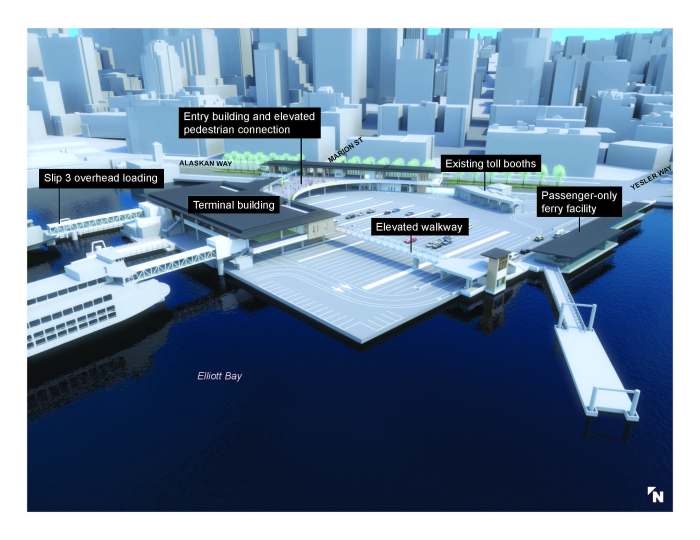 Riders of the King County Water Taxi will need to make other transportation plans for up to 10 days starting in early August.

Both routes of the popular foot and bike ferry service will be suspended while their crews move the Water Taxi’s float on the Seattle waterfront from the south end of Colman dock to the north end (toward the fire station and Ivar’s restaurant).

The temporary move is part of a larger project by the state to renovate Colman Dock. The Water Taxi will move back to a new and improved facility at the south end of the dock in about a year and a half.

That improved Water Taxi facility will have a weather-protected waiting area as well as elevators and a pedestrian bridge to the new Washington State Ferries terminal and its amenities.

While service is suspended in August, bus riders in both service areas can expect to see heavier-than-usual passenger loads on trips to and from downtown.

When the Water Taxi resumes service after its move to the north side of Colman Dock, the West Seattle route will be on a new schedule. This will account for the time it takes to board and de-board the route’s growing number of riders, and allow for Washington State Ferries to cross the Water Taxi’s route when arriving and departing from Colman Dock.

Here is the revised schedule for the West Seattle route after King County Water Taxi resumes service following its temporary move and service interruption in August.

To learn more about the move, new facilities, or the new West Seattle schedule, come to an open house on June 21 at Pier 50 (801 Alaskan Way on the Seattle waterfront). Look for the King County Water Taxi tent and drop in any time between 3:30 and 6:30 p.m.