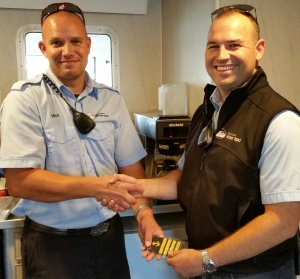 Get ready to salute, though. Nick recently received his captain’s license from the United States Coast Guard, and last week started driving the West Seattle route as a relief Captain for the King County Water Taxi.

“It was great to have all the support and all the compliments when I started driving. But it also will be great to not get as wet!” Nick said.

Nick is now the tenth of our 12 deckhands that work the summer schedule on the Vashon and West Seattle routes that have their licenses and can ‘bump-up’ to relief captain when needed.

This helps the Marine Division efficiently maintain a pool of on-call deckhands who can step up and captain the vessels when needed. Having a deep bench of capable captains keeps the Water Taxi service reliable and dependable for riders.

For deckhands, this gives them the opportunity to ‘bump-up’ to keep up their Captain skills and position them for future captain recruitment.