Mike Sudduth, left, plays a game of cribbage with Richard Franklin, right, as another game of cribbage takes place at the table next to them aboard the MV Sally Fox. Sudduth donated the specially inscribed boards as a way to honor his friend, Sally Fox, who was an advocate for passenger-only ferry service to Vashon Island and the vessel’s namesake. King County photo by Ned Ahrens.

On almost every run, enthusiasts of the popular card-and-board game can be seen huddled around one of these game boards, studying their cards, positioning their pegs and hoping for a coveted hand of 29.

Seasoned cribbage players such as Mike Sudduth know the game’s lingo inside and out. After all, the Management Services Analyst for King County Metro and Vashon Island native started the island’s first sanctioned cribbage club in 2006.

But for Sudduth, who donated the cribbage boards specifically for the Vashon route, they symbolize more than a simple game. They’re a testament to the legacy of the vessel’s namesake – Sally Willinger Fox.

When the Water Taxi introduced the new vessel to the Vashon route in 2015, the public voted to name it after Fox, who was a passionate advocate for the preservation of passenger-only ferry service between the island and downtown Seattle.

Fox passed away a decade ago, but not before she left an indelible mark on the Vashon Island community, especially Sudduth.

“She was always a person who liked to bring people together,” he recalled about his friend. “That was my motivation for the boards.”

The four cribbage boards aboard the MV Sally Fox honor the vessel’s namesake, who was an advocate for passenger ferry service between Vashon Island and downtown Seattle. King County photo by Ned Ahrens.

Cribbage and an idea

Sudduth remembers learning to play cribbage from a neighbor while growing up on Vashon Island. During his Navy days, he used to play against a buddy during their lunchbreaks.

But it wasn’t until about 1994 that Sudduth began playing cribbage regularly with fellow riders aboard the passenger-only ferry between the island and downtown Seattle, operated at the time by the Washington State Department of Transportation .

He began to study the game. He listened to experts and watched videos. Eventually, he and other cribbage enthusiasts founded the Vashon Cribbage Club, aka, the “29 Club,” a reference to the best hand a player can get.

“There are so many aspects to the game,” he says. “It can be as simple as you want, or you can get deep into strategy.”

Around the time Sudduth’s cribbage club became sanctioned, he and other residents of Vashon Island were dealt a blow when Sally Fox lost her battle with cancer.

The community would later honor Fox by naming King County Water Taxi’s new vessel after her.

“The idea came when we lost Sally Fox,” he says. “We were both advocates for the Water Taxi. We were friends too. When the MV Sally Fox was christened, I thought, ‘I have to do something more to remember her than just a boat.’” 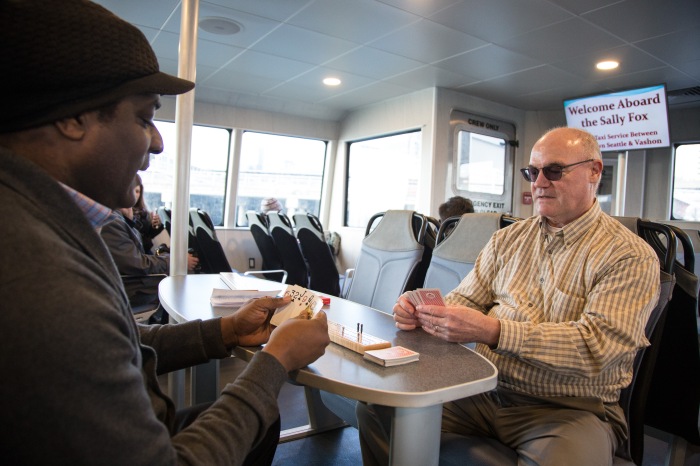 Mike Sudduth, donated the specially inscribed boards as a way to honor his friend, Sally Fox, says seasoned cribbage players can get in multiple games during the 22-minute run to and from Vashon Island. King County photo by Ned Ahrens.

‘Part of the culture’

In early 2015, Sudduth purchased four regulation tournament cribbage boards from a Bremerton man and had a friend laser-inscribe the name “Sally Fox” on each one.

He placed the boards on the vessel shortly after it began service. They became an instant hit with riders. On seemingly every commuter run, you can catch up to four games in action.

Riders also respect the game boards’ significance. Sudduth says he donated the boards presuming that at least one would be stolen or damaged within the first year or so.

Two years in, the Sally Fox’s cribbage boards remain pristine and accounted for. When the vessel is taken out of service, the crew transfers the boards to the temporary vessel then returns them when the Sally Fox is back on the water.

Though his friend Sally Fox didn’t really play cribbage, the symbol honors her love of bringing riders and residents of Vashon Island together, and the strength of her legacy continues today.

“This was my way of remembering her,” Sudduth says. “It’s part of the culture of the Vashon route.”